RSS
← Manday Hotties: Sexy Cowboys
25 eCopies of Nothing Lasts Forever up for Grabs → 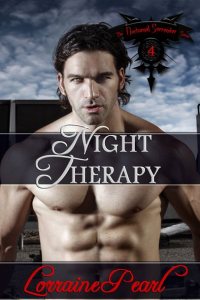 I had planned on waiting to start posting teasers from Night Therapy since I won’t have it ready for release until late summer, but when I wrote this scene, I couldn’t resist. Keep in mind this is still a rough draft and is unedited.

In this scene, Johnathan and Stephanie are preparing to make love for the first time, but they each have such strong personalities that they clash at times. I must admit that I’m falling for these characters even more with each chapter I write. If you liked Bastian and Nicole, then you’ll love Johnathan and Stephanie, too.

But don’t worry, Bastian and Nicole are still around in Night Therapy–and the entire series.

WARNING: THIS IS AN ADULT EXCERPT AND IS NOT INTENDED FOR ANYONE UNDER 18.

Still pinning her arms over her head, he slipped his free hand down until he teased the sensitive skin just above the waistline of her pants. After easing inside the material, he walked his fingers slowly along her swollen flesh, dipping one then two inside her slightly. She arched into his touch, but he stopped his maddening motion in response.

“No. You had your chance. Now I’m going to make you pay.” He pulled his hand from her pants and licked his fingers then plunged them back inside the fabric and palmed her entire pussy. “Mine,” was all he growled before his fingers shot inside her.

He was so damn sexy when that other side of him took over. Dominating, but somehow still vulnerable and sweet. It made no sense that he could be such a dichotomy, but then again, she was now, too.

Apparently he wasn’t happy with her mind wondering off again because he hissed her name and thrust his fingers in and out with a speed she had never imagined possible. With a vampire like Johnathan, she’d never need batteries again. His fingers vibrated in her core and coherent thoughts fled.

She might have cried out, moaned, or something, but as her eyelids fluttered open and closed, she couldn’t comprehend anything except the electric sensations shooting through her body.

His thumb massaged her clit relentlessly, pulsating at times. Just as the muscles in her core clamped down, he stopped abruptly and removed his hand to lick his fingers once more.

Short pants leapt from her mouth. She was right on the verge of orgasm…and he’d left her there writhing in need.

So what did you think of this little teaser? Would you like to have a sexy vampire like Johnathan holding you down and having his way with you?

Don’t miss out on book updates and releases.

If you want to sign up for my book updates blog to be notified when when new books are released, etc., please visit my website and subscribe by email.

Get your copies of the first books in this series.

If you want to buy any of the previous Nocturnal Surrender Series books, please visit the series website for purchase links.

← Manday Hotties: Sexy Cowboys
25 eCopies of Nothing Lasts Forever up for Grabs →

Nail Your Novel - Writing, publishing and self-publishing advice from a bestselling ghostwriter and book doctor

for writers and readers....

"There is nothing to writing. All you have to do is sit down at a typewriter - and bleed." Ernest Hemingway

A blog for authors, about authors, written by an author

Its those silly dreams that keep us alive...

Writing, Reading, and Helpful Hints for Dating in the Underworld

All is not quiet in the countryside

tell your stories, love your life

Authors You Want to Read

Get to know new authors and books!

Thoughts and ideas from the world of Penguin

And, for good measure, a bit of Cooking and Eating

AND HER LITTLE WRITING LIFE

Live to Write - Write to Live

We live to write and write to live ... professional writers talk about the craft and business of writing

Author of the Friends with Benefits Novels

Author of the Victoria Wilde Novels

Dedicated to the fans, the characters, and the books